Inspired by Pariah: My Personal Story about Coming Out as a Nigerian “Boi”

Originally written for and published at Autostraddle.com.

“Oh, what you think you’re a boy now?

My cargo shorts and graphic tees weren’t exactly what my mother had in mind when she envisioned showing off her daughter who’d “just returned from America with an MIT degree!” to her friends at church.

The prodigal daughter, I’d returned home to Nigeria for my high school bestie’s wedding. We hadn’t seen each other in five years; during that time I’d not only come out as queer, but founded an organization for immigrant and/or queer women of color (QWOC+ Boston), cut my hair into a frohawk, and started dressing as a boy. I’d pretty much gone from a lip-gloss-wearing straight girl to the gayest person ever, but nobody had witnessed the transition, not even my friend who was getting married. I hadn’t reached out to her for fear that I wouldn’t be able to lie about who I was, and that soon after she’d tell her mom, who would tell other moms, and eventually the rest of Lagos where my parents lived, forcing my mother to endure becoming the center of gossip and ostracizing her from the very social networks she needed to make ends meet. My mother relied heavily on referrals from her religious community about various contract jobs — event planning, hotel management etc; the last thing she needed was a taboo subject like “lesbianism” turning off potential clients.

Needless to say, I hesitated when my friend invited me to be part of her bridal train, but I couldn’t refuse an invitation to be part of my girl’s wedding, even if it meant wearing a bridesmaid dress. I tried to get out of it but she firmly insisted that the dress wasn’t up for negotiation. “Well, what then if you don’t wear a dress?” she’d asked laughing, “So, you’re going to wear a suit and stand with the boys?” It hurt my feelings, but I laughed along with her and rhetorted, “Obviously not. That would be ridiculous.” That was just the beginning.

I spent the entire two weeks of my first visit home since my queer transformation absorbing my mother’s daily jabs at my clothing (and eventually, anything I said): “So you’re earning all this money and can’t even afford some nice tops?”, “You really should dress your age”, “What, you think you’re a boy now?” Gender binaries. If there was ever a place for them to thrive unchecked, it would be Lagos, Nigeria, a place where being gay is not just viewed as a choice, but a crime, and — pending the new anti-LGBT bill being deliberated — holding hands with your best friend or choosing same-sex roommates could be made punishable for up to 14 years in prison. But while I was plenty aware of the political debate around my identity as a queer African, I couldn’t have cared less about the law; I was still trying to survive within the confines of my own home.

The night before the wedding, my mother was chaperoning me through the bridesmaid dress fitting. As the strapless lilac dress found its awkward place on my body, the delicate layer of my personal confidence dropped mercilessly to the floor. I felt naked and invisible at the same time. As the zipper went up, I felt increasingly suffocated. The silver, high-heeled shoes my mother had purchased for me earlier that afternoon didn’t help either. The entire ensemble felt like a ridiculous costume.

Long before that moment, it had been easy to “dress up like a girl.” I even had a nickname/alter ego for that person “dressed up like a girl” — “The Empress.” But now, being forced to wear drooping earrings and high-heeled stillettos felt less like “performative drag” and more like the real me didn’t matter.

When my father said I looked “pretty,” I immediately went on a dramatic tirade (more dramatic than usual) to assert that this wasn’t who I was. “You only compliment me when I’m wearing clothes I don’t want to wear,” I complained, “I don’t feel pretty. I feel stupid.”

He laughed then, dismissing my gender non-conformity as me being “a rebel.” He’d been a “rebel” too, he told me (although I can’t recall seeing any pictures of him in dresses). My mother, on the other hand, was on to me. She eyed the dress silently; it was a fitting disguise and I could tell she was relieved I was wearing it.

Throughout my stay in Nigeria, the micro-aggressions continued: from things as silly to being called “feminist” (as an explanation as to why I had a puzzled look on my face when some girl said that all women should cook for their husbands to avoid making them angry), to my mother dragging me through stores to purchase large, obnoxious earrings, and to straight up homophobic rants, which I suspect were directed at me — “We don’t have that rubbish here in Nigeria — all those gay people in America, why should we be copying them? This is Africa!” Thanks to America’s media, my friends’ perceptions of gay people were limited to comic relief — white gay men dancing glittery and half-naked down the streets, lipstick on, “dressing like women.”

When I vented to my friends in the US, I was met with well-meaning — albeit privileged and individualist sentiments — “Who cares what they think? You should be able to wear what you want and be yourself. Fuck ’em.”

Admittedly, even I had my doubts that I was who I said I was — a gay Nigerian? After all, just after I’d come out and I’d filled my Netflix queue with every recommended film from the Gay and Lesbian section in search of narratives that aligned with my experience. But I could barely find any films that included women of color, let alone African lesbians.

I realize now that I was searching for affirmation of who I was because a part of me was still internalizing homophobia; “I’m Nigerian, we’re not gay. I must be the only gay Nigerian in the world.” And even when I finally met another queer Nigerian, I dismissed her because she “hadn’t been raised at home.” If I was so quick to dismiss queer Nigerians, what chance did I have that my Nigerian family would ever come around?

But then I saw Pariah, and I knew instantly that this was the film I’d been searching for. Pariah could save me from endless arguments over laws, policies, and tradition currently in Nigeria’s media. Pariah could humanize me — turn me from “issue” to “person — and earn me empathy instead of judgement.

For the group film screening I’d helped put together for QWOC+ Boston, I’d dragged a whole crew of people: my partner, a few friends, and my straight Nigerian, Christian brother, who’d always been supportive of me, yet still had moments when he dismissed my masculinity and/or gender presentation without knowing it; like the time my mother had forced me to wear our traditional attire for his graduation (I wanted to wear the men’s kaftan, but she’d put me in the elaborately feminine women’s counterpart — the iro and buba), and he’d told me to get over it, saying flippantly, “It’s not like you never wore this stuff before.”

I remember holding my breath during pivotal scenes in the movie — like when Alike was forced to put her earrings back on before she returned home in an effort to hide her gender identity from her parents. I wondered nervously if my brother saw then the direct parallels to his own sister’s life, if he could finally understand that my protesting the outfit my mother had brought with her from Nigeria wasn’t just about defying norms for the sake of being a rebel; I really did feel more like a boy than a girl.

During the Q&A portion of the screening, Adepero Oduye (the Nigerian actress who plays Alike in the film) told us, “When my mother first saw the film, she said, ‘People here [Nigeria] need to watch that movie. You wouldn’t believe all the things they are always saying. They need to see it. They need to understand.’”

After I emerged from the theater, deliriously happy after seeing a gay character whose experience I could finally relate to, my brother relayed that the film’s exploration of masculinity within the women’s community was similar enough to his own experience that he too deeply connected with Alike. And therein lies the power of Pariah: whether or not you are part of the LGBT community, expect to “aww” and cringe several times per scene, as both the acting and directing create a winning combination for unlocking the most powerful tool in social change: empathy.

The world is watching Nigeria right now, turning their noses up at our senators who proudly proclaim that “homosexuality is unAfrican”. Nearly every other day I read a new press release from a human rights organization that condemns the latest version of the anti-gay bill. Hilary Clinton’s riveting speech about protecting human rights around the world may have brought temporary solace to many of us who are directly impacted by the move to criminalize homosexuality in various African countries, but I know firsthand that rhetoric alone will not change the world. I know from experience that my happiness will not come from winning legislative battles, but winning hearts, and films like Pariah have the power to do just that; it is films like Pariah that can and will change the world. 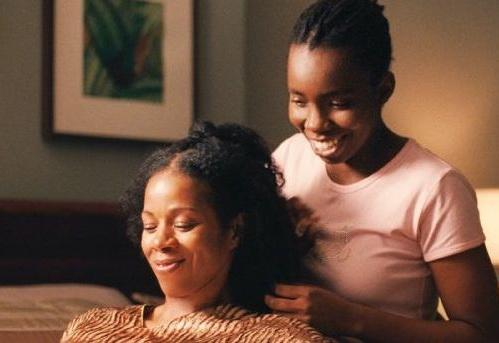 For Nigerians to accept its LGBT citizens as Nigerian, they need to experience queer stories as part of our own cultural landscape (as opposed to an American sitcom on Showtime) and framed within every day issues Nigerians like my parents can relate to: lack of electricity, overbearing mothers bickering over whose daughter will get married first, and simultaneous deep-rooted disdain and yearning for modernization. Pariah may not be about LGBT Nigerians or Africans, but Dee Rees’ bold narrative has certainly opened up the possibilities for such films, at least for people like me.

So as my country deliberates the new anti-LGBT bill, I pray for LGBT Africans to find their own Pariah, and I look forward to my mother finally seeing the film so that, just like my brother, she will finally be able to hear me when I say “I am Alike:” a proud queer, Nigerian boi, but more importantly, still her daughter.