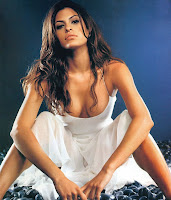 “Speaking of Latinas…” I have had the biggest crush on Eva Mendes ever since I saw her wearing that sexy, white, figure-hugging dress in Ghostrider. Damn. The picture on the left isn’t even close to what I’m talking about. You gotta see the real thing. The scene in which she’s interviewing Jonny before he does the 100-car stunt is the only part that makes the film worth watching (besides numerous opportunities to mimic the devil’s deep growl… ‘hmmmm’).

Eva Mendes hasn’t been the only objeto de mi amor. Earlier this year, right after I’d decided to give dating a try again, it seemed that all I did was pick up Latinas everywhere I went. I’d go out with the sole intention of having a good time with my friends (ok ok, and flirting with some cuties), and the only woman that would make me stop dead in my tracks would be Latina. There was one time I got so excited over this Lebanese girl – danced with her the whole night only to find out that she’d lived in Venezuela all her life, spoke fluent Spanish, and identified more with her South American experience than her Arab heritage. She even cursed in Spanish! I decided to call her my “Lebatina,” because she was definitely one of a kind. However, she failed the test to become my one non-latina crush, and I found myself wondering if I had a weird fetish. In fact, I started to freak out. I’m not sure if the average person would think twice about their sexual preferences but, being the socially-conscious-and-commentating, intellectual, iQWOC that I am, I had to question it. Had I become one of those shallow consumers of pop culture that had joined the media and everyone else in exotifying women of color? 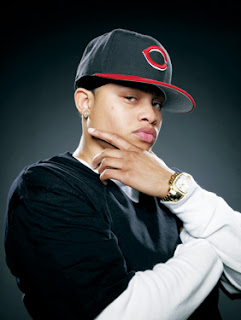 I’ve always hated it when certain kinds of white girls come up to me and are clearly only interested in me because I’m a tomboi woman of color, and they think I fit some stereotype; that I’m a ho-baggin’, shit-talkin’, ball-playin’ stud. And, I don’t even look 1/2 as gangsta as homegirl in the picture. Nevertheless, I get ‘profiled’ often enough when I go out in uber white Boston, and the ladies start talking to me funny, ending every exclamatory sentence in “girl!” or worse, try to prove that they know how to wind and grind by thrusting their asses into my crotch in the middle of the dancefloor as if we’re in a 50 Cent music video. Ridiculous. My brother and I ought to commiserate. Meanwhile, I’m supposed to be excited about playing this urban cool part, even though I know deep down that these girls don’t really see me at all. All I am to them is a really hot (ahem!) bad girl who’s going to mistreat them and, ultimately, isn’t going to become anything more than a fling. Ouch. Nah, there’s no way I could ever reduce an entire culture however stereotypical (or, in my case, easy) into a resume of one-night stands. I don’t care what the Advocate says; I know better.

I’ve never hollered “Ven aqui, mami!” ignorantly anytime a beautiful Borequa walked by, nor have I immediately demanded (before names have been exchanged, even) that they “teach me salsa” (since they must ALL know how to do it). I’ve always approached my crushes as individuals in spite of the fact that I saw something common about what had attracted me to them physically. I mean, the dark hair, brown skin, and cuuuurrves (that’s pretty much my type across the board, I don’t care what your heritage is) were especially hard to ignore, but I’ve never let that influence the way interact with them. Or, at least I hope not!

Recently, I caught myself a number of times struggling for something else to latch on to besides the ‘Latina-ness’ of the women I’m accidentally attracted to. I say accidentally, cause really! It’s not like I am attracted to them after they tell me their names or where they’re from or I hear an accent. It is usually from across the room I go “damn!” and then after I get the details, “Of course, you are…” Why else would I have clumsily spilled my drink when you walked by? (I don’t say that part out loud, I’m corny enough). Anyway, I find myself wanting to delve deeper and humanize them as quickly as possible (even under loud blaring speakers) . “What do you do? Where do you usually hang out? Do you like Sci-Fi movies? Otherwise we can’t be friends. Have you always lived in Boston? No? Where did you move from?” And, from that point on, it isn’t hard to connect. It is usually in that moment that I find a person similar to myself.

It all makes perfect sense to me now. I think I keep looking for her, the queer immigrant who has been dislocated from her culture… like me. And, as experience has proven to me, I have a greater chance of meeting her, connecting with her, and sharing with her, when she’s lived in the Dominican Republic, when her family’s Puerto Rican, or Brazilian… or a South American Lebanese girl, struggling to find her niche in Boston.